What are moonrocks and sunrocks?

Moonrocks weed and moonrocks seeds are some of the widely searched terms by those who use marijuana. Whether they have heard about the terms for the first time or they know what they are looking for, moonrocks weed and its related products are what you should be thinking now.

The other related terminologies, which receive large search volumes, are sunrock weed and sunrock seeds. Knowing what these terminologies mean will help you have a better and deeper understanding of your favorite weed and its various forms.

However, you may ask, what is the difference between moonrock seeds and sunrock seeds if any? What is sunrock marijuana? This write-up will help you get the answers to those and other provocative questions you may have to help you have a better understanding of the two terminologies.

Before we look at the terminologies independently, here is a quick comparison of the two:

When these terms are used, they refer to a special cannabis combination that centers around three parts of marijuana namely the bud, kief, and the concentrate. As you may now guess, when weed users combine specific elements of marijuana, all they want is one thing – high.

Yes, when these three special elements come together, they will not only make you feel high but will help you attain a very high feeling – perhaps the highest limit anyone using weed has ever attained.

Although they make you extremely high when they combine, would one of them be stronger than the other? In other words, which is stronger moonrock or sunrock?

Let’s start with the first terminology.

Ever seen something that comes into the scene and within a few days, it becomes the talk of the town, the people’s favorite? That explains Kurupt MoonRocks. This product emerged on the marijuana streets recently, but the rate at which it is gaining traction is overwhelming.

To achieve the best moonrock and its effects thereafter, you need to get the ingredients and contents well. Creating moonrock is simple. You only need to ensure you put Girl Scout Cookie bud(s) into hashish oil. Upon taking up enough hashish oil, you will need to smear the bud(s) with kief.

Think about it! You have just soaked the buds into hashish oil and now you are smearing the bud with kief to ensure all the contents in the bud are held into position. Besides, the bud and the Girl Scout Cookie you are using are friable. Dusty cannabis is one of the rare cannabis with high THC levels, exceeding 60%. At this level, you cannot dare question moonrock’s potency.

In fact, for a long time, probably before any other thing was discovered, marijuana users took Moonrock to be the strongest and likely the only candy with extremely high potency. That would end sooner. 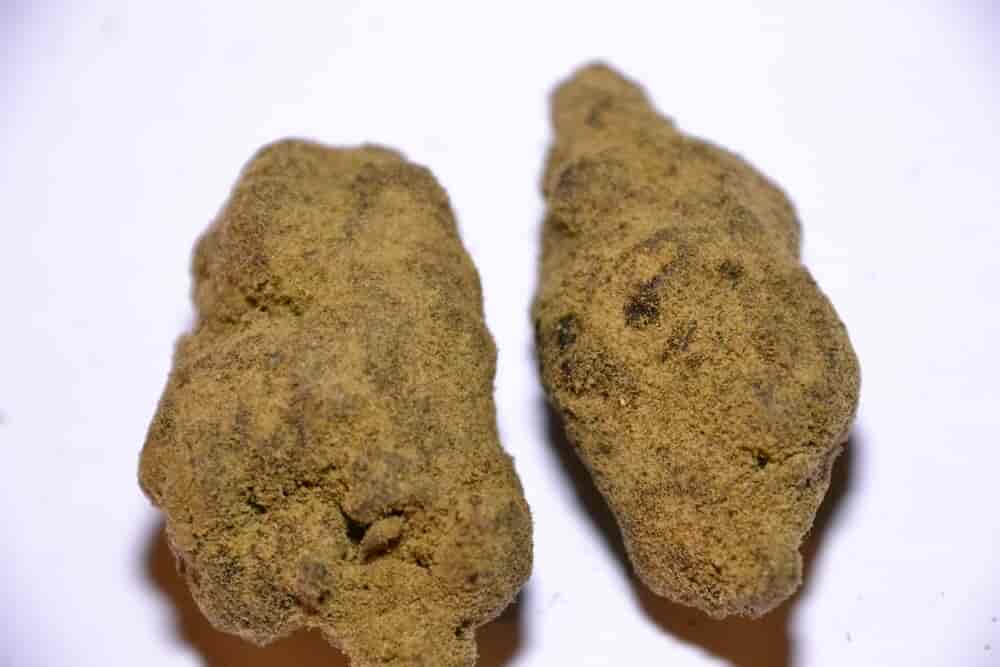 Moonrocks are weed buds rolled in hash oil and then covered in kief. Sounds yummy, doesn't it?

The world of cannabis keeps evolving. When you think, what you are taking is the best in creating the euphoric feeling you need, researchers and weed enthusiasts are busy creating a much better and euphoric product.

Like moonrock, sunrock emerged recently. In fact, the latter came to the market a few years ago. Interestingly, sunrock is quickly beating moonrock in many ways. Looking at the basic components of making sunrock, you will realize they are the same as those of moonrock.

In addition, sunrock’s THC level is almost the same as that of moonrock. However, a subtle difference exists, something that makes weed users tend to prefer sunrock to moonrock.

Incidentally, the manufacturers of the two use high-quality buds. However, critics have it that the quality of buds used in making sunrock is much better than that contained in the moonrock.

A recent probe into the two shows that while moonrock has a THC level of 60%, sunrock enjoys a much higher THC level. The study found out that sunrock’s THC level stands at 80%. With an additional 20% THC level, it is evident that sunrock will give curious weed users a high they would otherwise get nowhere.

So, which would you prefer? It is important to know that although moonrock has a lesser THC percentage; it has a thicker kief layer. Sunrock on the other hand has a thinner kief layer but it has a much higher THC level.

For sunrock weed to have that higher THC level, the makers use concentrated THC instead of hashish oil used by moonrocks. If you were to compare the intake, sunrock users would take a bite, yes, a small amount of it and they are high instantly.

Moonrock users, on the other hand may need to take a bit more of their preferred product to attain the high, which is quick to attain with sunrock.

The other thing that stands out in this conversation is if you are a beginner, you’d better start with moonrock. Sunrock is for hardcore weed users since it creates a much higher euphoria, which you wouldn’t want to try if you are just starting to test weed.

The pricing of the two is also considerably high with sunrock beating moonrock. The former is costly compared to the former. However, if money isn’t an issue yet you want to get high, don’t waste your time. Get something that will give you the high you need and remain ‘locked’ to your couch the whole day.

If you are fortunate enough to lay your hands on the two, you need to know that smoking these trendy products is not the same as you’d do your normal weed. You need to master a few tricks to smoke sunrock and moonrock effectively.

The first rule is to NEVER grind them. Using a regular weed grinder will deprive you most valuable ingredients. Instead, use scissors and fingers to separate them.

There is no harm in mixing them with regular herb.

Make good use of a bubbler, bong, or even a pipe. Using these tools helps you cut waste. With the value of the moonrocks and the sunrocks, you wouldn’t want to lose anything.

PS. Due to their high potency, a section of the users takes the feeling as that of dabs. Besides, you need to start small/low because of the product's potency.

We are not sure when we’ll have another product with a potency similar to that of Sunrocks and Moonrocks. However, one thing is certain – these two products have high THC levels. If you are starting, keep your intake at a minimum. As you grow in your weed intake, you can increase the daily dosage, as you like. For now, if you want to try, start with Moonrocks, then Sunrocks.

Occasionally, cannabis traders mask their moderate cannabis buds and also use their low-quality extracts and crystals. That way you pay a lot of money for a doubtful end product. Of course, there are many moon rock makers who claim to use only first-class ingredients. So watch out that you buy quality and not space waste.