The Difference Between Joints Blunts Spliffs

Lots of people overlook terpenes when it comes to cannabis, but they are actually what gives the plant its famous flavour and aroma, as well as holding multiple therapeutic benefits that have recently been discovered. One of these terpenes is called geraniol and is found in not only cannabis, but various other species of flowers, fruits, and vegetables.

New research suggests that terpenes have a huge part to play in the characteristics and effects of different cannabis strains, which means that terpene content actually determines what kind of high a variety can give off. Geraniol is one of these terpenes and is also found in lemongrass, blueberries, lemons, roses, and carrots. It's also made by bees, who use it to mark their territories.

Geraniol is often used as a natural alternative to chemical flavourings found in food, such as sweets. You can also find it in lots of lotions and soaps because of its floral, fruity smell. However, new research has come to light which suggests geraniol is good for more than just smelling fruity, it has some useful therapeutic properties as well. 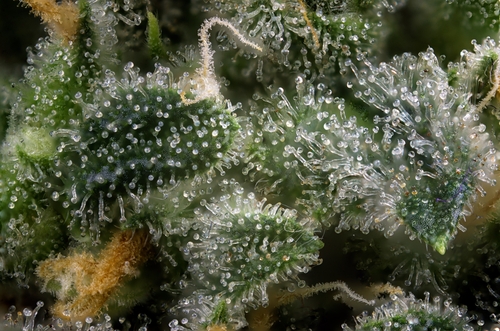 It may come as a surprise that geraniol has the potential to assist in the treatment of various cancers. This is because there is an abundance of scientific evidence which all points towards the terpene as an organic antioxidant that discourages tumour growth. In fact, Biochemical Pharmacology released a study in 2005 that demonstrated how geraniol limited the proliferation of MCF-7 breast cancer cells. As well as this, the Cancer Medicine Journal published some research in 2016 that showed geraniol to have the ability to inhibit the growth of prostate cancer cells and thus, stop cancer from spreading.

There is still much more research to be done on geraniol and all of the other 200+ terpenes that are out there, but what has been published so far is incredibly promising and hopefully, with wide-spread legalisation, cannabis will continue to be used in the medical industry to help improve, and even save, more lives.

Roll a blunt with our high-quality BOB MARLEY strain