How To Make A Thai Stick

The Origin Of Thai Sticks

This cannabis product was popularized during and after the Vietnam War. Ex-soldiers who were familiar with the gulf of Thailand started covert operations, which included drug trafficking. As a result, thousands of kilos of hashish and weed were hauled from Asia to the United States during that decade. One of the products that stood out was Thai sticks.

What made Thai sticks stand out? The simple answer lies in their genetics - massive potency. 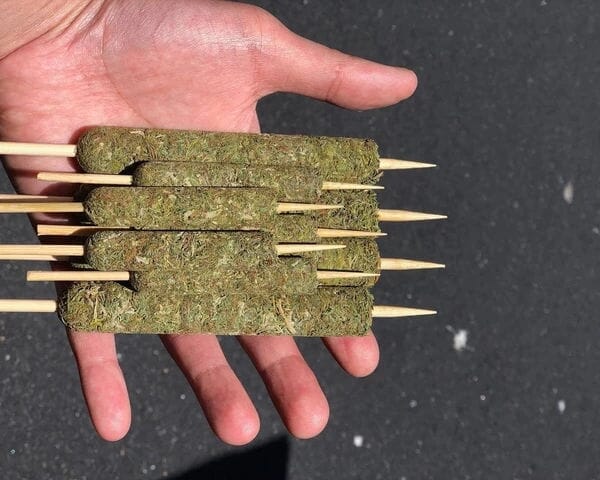 How To Make Thai Sticks

To make a Thai stick, you would need whole cannabis buds. Some say that fluffier and larger cannabis buds are needed but that is not necessary. You can use whatever you have. Just make sure that it is good cannabis.

One would also need hemp wick which would allow for the sticking together of the cannabis to the leaf when it is wrapped. You would also need a cured cannabis leaf, cannabis oils as well as a stick or a skewer.

The actual process of how to make Thai sticks initially you would have to take your skewer and stick it straight though the cannabis buds kind of like a kebab. It was feared that traditional skewers, which were made of bamboo were dipped in opium, which launched smokers of Thai sticks into a wild high.

In modern times however the skewers would be dipped into cannabis oil or sugary water which would allow for the action of attaching the buds to the stick much easier as the oil would act as glue.

The choice of either using oil or water rests upon how high the user wants to get. When attaching the buds to the cane, you should keep in mind that a space of about 1 cm should be left at each end. At this point you should be careful not to break up any of the skewered buds.

The next step in how to make a Thai stick is to tie the bud with a hemp string. Starting from one end wrap the bud covered stick tightly with a string from top to bottom. One point to be mindful is that you should wrap the hemp line on the bud to create an even width throughout the Thai stick so that there is an even burn throughout the smoke.

After this period you should take the package out of the freezer, remove the parchment paper and carefully unwrap the string. This should be done with great care so as to prevent the buds from breaking apart.

Next in the process of how to make Thai sticks would be to wrap the product again but this time with fresh cannabis leaves which should have been prepared forehand. The preparation of the cannabis leaves just entails carefully washing the leaves.

Once the leaves are ready coat the buds with oil or sugary water and carefully wrap the Thai stick to a first leave. You then need to coat the product in oil again then wrap it to a second leaf and then a third leaf.

Moving on in the process of how to make a Thai stick would be to wrap the whole thing so far in parchment paper and then heat it on a pan or a hot plate for a few seconds which would act to fuse all the elements, melting the oil and sealing all the layers of the Thai stick. After this, the next step in how to make Thai sticks would involve curing your stick. This can be done in a number of ways.

Whatever method you choose the first thing you should do is remove the parchment paper, wrap the Thai stick in the string once more and cover it again with paper. Then place it in a vacuum-sealed bag and put it underground for a few weeks.

In order to avoid mould issues you can alternatively put it back in the fridge for 3 – 4 days. Once cured the final process is to simply remove the second parchment paper unravel the string and light it.

For the actual use of the Thai stick, it is preferred from normal joints because it burns longer, burning on average for about 6 hours. I mean who would not want to experience a cannabis smoking that doesn’t go out for hours.

You would have to remove the stick from the centre of the Product. This would leave a hollow space in the middle, which would allow for ease of airflow to smoke efficiently. Generally, a Thigh stick burn resembles that of velvet, e extremely slow burning.

Thanks to many factors such as cannabis legalization in various countries and the emergence of social media and networking, Thai sticks have experienced a rapid revival in recent years being widely known as Cannagers to majority of people. Modern techniques of making Thai sticks somewhat differ from traditional methods in that nowadays extracts such as Butane Honey Oil (BHO) are being used as opposed to sweet water or cannabis oil.

Marijuana gives you the liberty to try different preparation methods as well as ways to ingest or use it. Whether you are an experienced smoker or just someone trying to have new experiences, a Thai stick is something you should consider. The beauty is this article has not only shown you how to use a Thai stick but also how you can make it.