We all know what a cannabis plant looks like. But which parts does the plant actually consist of? If you look closely at the flower tops you see all the beautiful details.

Marijuana grows on long stems, on which large iconic leaves grow from areas called knots. What really stands out about the cannabis plant are the flower tops, which have many beautiful and unique variations.

We all know what a cannabis plant looks like. But which parts does the plant actually consist of? Let's take a closer look at our favorite plant. 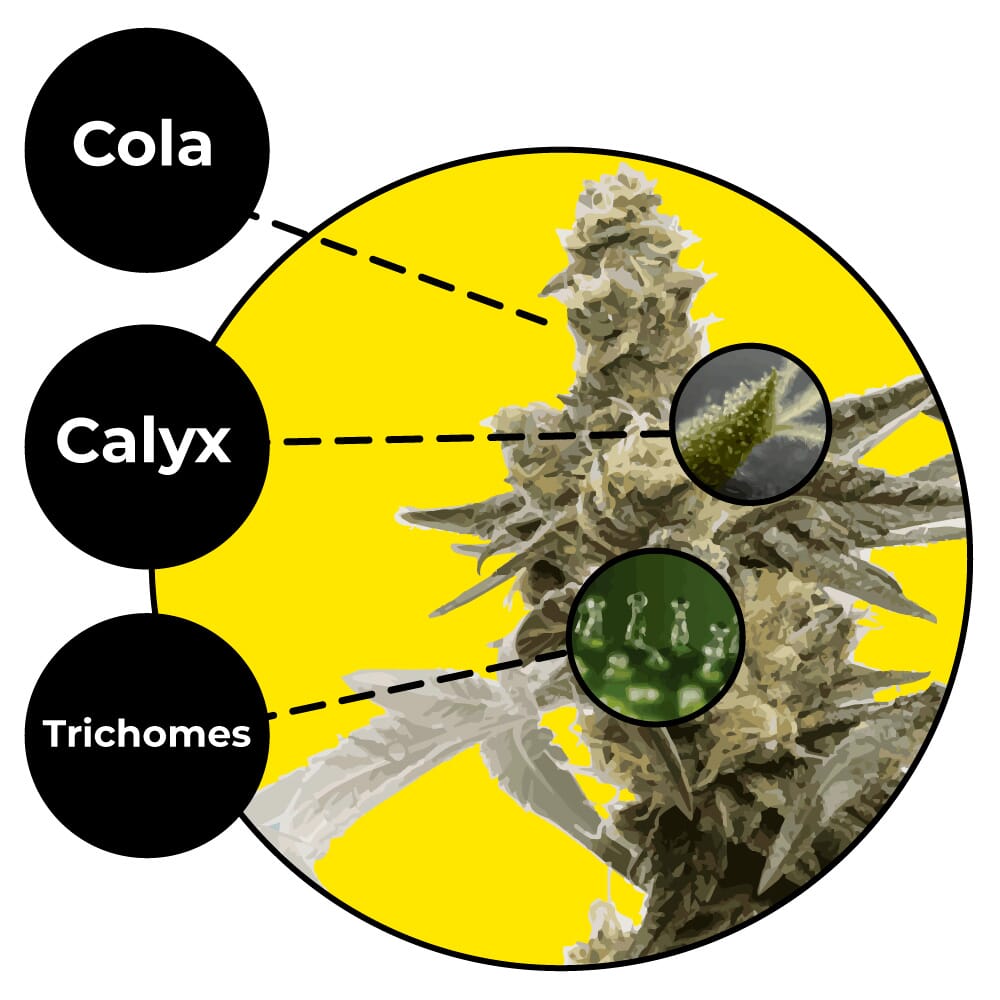 The Cola is a cluster of buttons. These buttons are firmly connected to each other and they connect to each other. There are small Colas that sit on the lower branches. The most important and largest Cola is at the top of the plant.

The reproductive parts of the cannabis flower are in the pestle. Hair strands are attached to the pestle are called stigmas. Stigmas collect the pollen from the male plant. If the weed plant is young, the stigma's color is white, but when the plant grows older, the color changes to yellowish-brown and sometimes red.

Stigmas are important for the propagation of the cannabis plant, but they contribute little to taste and potency.

A bract encapsulates the reproductive parts of the female plant. They are a kind of green leaves that are covered with resin glands that produce a lot of cannabinoids.

Trichomes are very small, but you can't miss the crystal resin layer on a marijuana bud. The resin is released through translucent, mushroom-shaped glands on the leaves, stems, and chalices. When these trichomes are dry, this weed dust is called 'kief'.

Trichomes are actually a natural repellant the plant uses to arm itself against invaders like predators. Trichomes provide an oily aroma called terpenes, as well as cannabinoids such as THC and CBD. Hash is also made from the powerful, sugary resin that trichomes produce.

Disclaimer: This content is meant for educational purposes only. It has been compiled with research from external sources. it is not meant to substitute any medical or legal advice. Please see your local laws for the legality of cannabis use.
Joe Green

Let me introduce myself, I go by the name of 'Joe Green'. People gave me that nickname for obvious reasons. I am from Amsterdam, the marijuana capital of the world, and I have been growing Cannabis for more than two decades.

From the moment I first started working in the cannabis industry, it has been a real rollercoaster. From small home-setups to industrial plantations, trust me if I tell you that I've seen it all - those were the days!

I’m a connoisseur of all things growing. From a small space bucket, to a tent, to a field, I’ve tried it and loved it all. I’m here to show you that there’s no need to be intimidated by growing cannabis. It can seem complicated at first, but it does not have to be. You just take it one step at a time. If you have good seeds and a bit of dedication, you’ll do just fine! Feel free to reach out to us at AMS if you have any questions!

Cannabis Leaves –The Ultimate Guide
Marijuana lovers! Gather round, let’s talk about the leaves of your legendary pot. It sounds unusual, but there are many things you probably don’t know about the marijuana plant. You might have a million acres of carefully tendered marijuana and still miss out on the fun of knowing your leaves.
Continue to read

Which Is Better: Growing Cannabis Indoors Or Outdoors?
The debate of whether indoor cannabis or outdoor cannabis cultivation is better has survived through many years. Regardless of the method you’ve selected, there are many factors you need to consider. Not only will these factors guide your choice, but they will also help you consider making the necessary changes along the way.
Continue to read

Marijuana and Fertilizers
Growing marijuana requires more than just sticking a few cannabis seedlings into the soil and waiting for its buds. In addition to carefully tracking its growth, cannabis demands a lot of careful tendering.
Continue to read